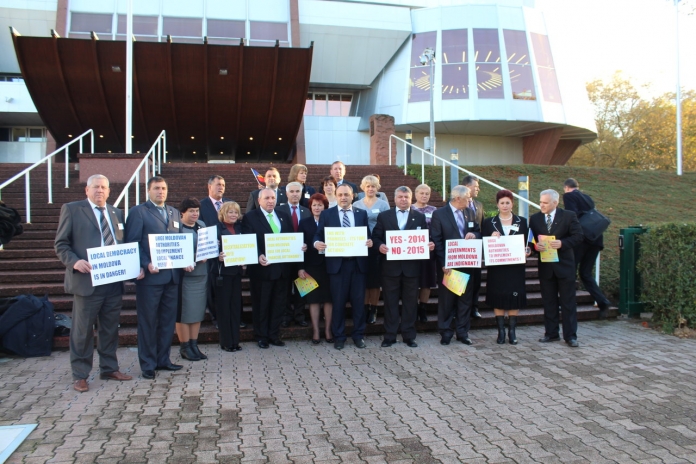 Not finding understanding with Moldovan politicians, who do not intend to listen their own people and outcry of Moldovan communities, who have compromised entirely the declared public administration, decentralization and local governments reforms and who instead of a civilized dialogue commonly accepted in the European countries use a rather different arsenal of “negotiation tools” such as intimidation of mayors, direct threats, penal charges, populism, direct buying of local governments’ consent and others of the kind utilizing all the oppressive force of administrative, political and financial tools of the consolidated power vertical in Moldovan society. All that comes after three years of national debates and discussions on the models and methods of decentralization reform, after National Decentralization Strategy was approved as a Law in April 2012, after all national and international experts agreed on the rather profound benefits of the suggested key reform towards local and national democracy – local finance reform, after all institutions of the Council of Europe have recommended and even have demanded this reform, after the unanimous consent that was achieved among major forces in Moldova – local governments, ministry of finance and state chancellery, after millions of euro of donors funds were spent. Local finance reform is the single and the only reform declared in Moldova towards radical democratization of Moldovan society, towards demolishing of corruption and towards significant improvement of public services.  Being afraid of losing national elections in 2014, Moldovan politicians intend to maintain and to consolidate the power vertical and have denounced the committed and already approved in two readings by Moldovan Parliament the Law on Local Public Finances provoking widespread, intense and profound frustration, irritation and indignation among local governments and communities in Moldova.

In these conditions Congress of Local Authorities from Moldova after organizing a national protest of local governments on October 11, 2013 with participation of 300 mayors has decided to use the only available communication tool with Moldovan politicians – European Institutions, which represent the single and the only authority for Moldovan government, moreover on the eve of the signature of Association Agreement with European Union in November 2013 at the EU summit in Vilnius.

In this line of ideas CALM kindly asks all its colleagues – local governments from European Countries, local governments associations, pan-European networks of local governments associations, international organizations active in the field of local government, to support the noble and uneasy fight for local and national democracy in Moldova as well as for European future of Moldova, which are in the grave danger. CALM appeals to all this  organizations to kindly communicate their solidarity with CALM’s stand on the urgent need for consolidation of local and national democracy in Moldova to the representatives of the EU institutions, to their voices in EU structures and help CALM in this way to save both Moldovan democracy and European aspirations of Moldovan people.