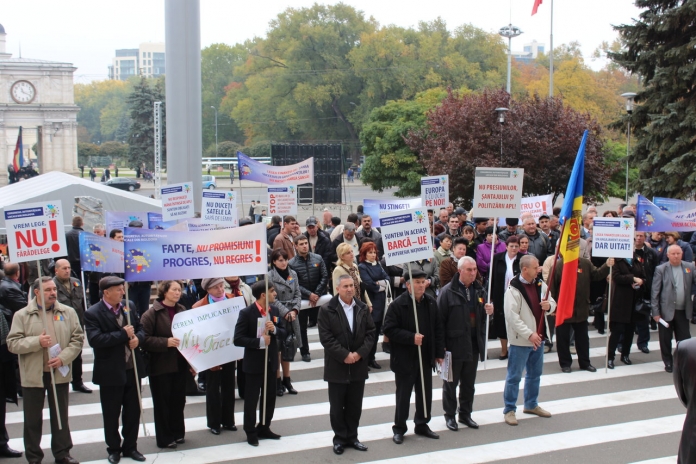 On October 11, 2013 in Chisinau over 300 mayors took part in the local democracy and local government support demonstration to say decisive “NO” to the degradation of public administration system and decisive “YES” to local and national democracy in Moldova.

Mayors protested against Moldovan decision-makers who are determined to postpone the application of draft legislative modifications on local public finance, legislative amendments that are having two key dimensions – breaking the top-down power vertical in public administration and essential improvement of public services.  This reform represents the major steps towards the democratization of the country, which ratified the European Charter of Local Self-Government in 1997 without reservations.

Unfortunately the first dimension is finding some serious opposition on behalf of Moldovan politicians, who initially making all-embracive international commitments towards decentralization reform and spending millions of EURO of donors funds, all of a sudden did realize that democratization of the country is not entirely in their interests and might penalize them during national elections in 2014. Being reluctant to implement this legislation from 2014 they are eager to maintain power vertical in the country as well as political, administrative and financial control over local governments especially during election campaigns.

Such a situation could not be tolerated by Moldavian Local Governments and on October 4, 2013 during the extraordinary session of CALM Administrative Board was unanimously voted to protest on October 11, 2013. CALM warned about “the consequences of non-approval of this legislation and further deterioration of local government in Moldova” extending to “all connected domains such as public administration, local and national democracy, corruption, justice, human rights, etc.” The non-approval of the implementation of the local finance reform would represent a violation of Moldovan law. In 2012 a National Decentralization Strategy was adopted by the Parliament with the aim to transfer competences and financial resources from the central to local authorities.

Despite huge political pressures on behalf of ruling parties who created impediments for mayors or even tried to prohibit mayors to come to the protest, the demonstration gathered more participants than was initially expected.  The protest started at the Governmental building where basically all participants have had a chance to share their thoughts with their colleagues and with the population at-large through mass media extensively present at the event. Afterwards the peaceful demonstration moved to parliament where the meeting continued.

This was the first and even preliminary action organized by local governments. At the meeting was decided to give politicians some time (1 week) and if local finance reform will not be approved by the Parliament and local governments’ aspirations will not be heard – to continue actions in a week or so, but in a rather extended format inviting also the people to support local governments claims and addressing directly to population because at the end of the day the local finance legislation being in essence truly and genuinely about the radical democratization of society – first of all is in the interests of the citizens of Moldova.

Besides actions taken throughout the country CALM also addressed on the matter to the European institutions, international organizations and donors and is already receiving support.

CEMR Secretary General, Frédéric Vallier, regrets this situation: At a moment when we are celebrating the 60th anniversary of the Charter on Municipal liberties*, CEMR is in full solidarity with the action of the Congress of Local Authorities from Moldova. Decentralization is essential for local development and sustainable growth. The action taking place today shows the capacity of CALM to gather the energy of mayors and local authorities in their fight towards local democracy.
The local autonomy in Moldova is closely monitored by international organizations. The Parliamentary Assembly of the Council of Europe (Resolution, October 2013) urges Moldovan Government to approve legislative modifications on local finance reform to be implemented from 2014. In addition, the Congress of Local and Regional Authorities of the Council of Europe (Resolution on Local and regional democracy in the Republic of Moldova, March 2012) ask for urgent decentralization and local finance reform in order to support the country’s public administration system.

24 communities boost their local economies by partnering with public authorities, diaspora and businesses